Over the years we have gone to some funny emergency call outs that would either make you laugh or cry so I thought I would share some with you all. I had a gentleman call me saying he would like me to attend ASAP as an emergency call out as his wife has locked herself in the bathroom so could I come and help. He also mentioned his wife was seven months pregnant so I said no problem I will be with you in the next hour. I arrived 45 minutes later to discover a ladder leading up to the bathroom window so I thought he had given her a cup of tea but to my astonishment she had climbed out of a small opening window and down the ladder, amazing. 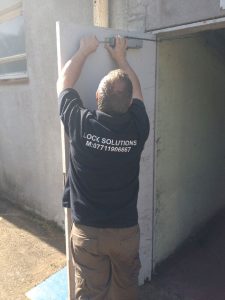 Now been called out a couple of times from people who say their key won't turn in the lock so I take down their address and discover when I turn up they have been trying to get into their neighbours house which is identical to theirs except they both have different numbers on the doors.

The most popular of all the emergency call outs is when people tell me their key won't turn so there is obviously something wrong with the lock. I turn up to find they could have been living in the house for many years but something is telling them to turn the key the opposite way or they may have even been trying another key on the key ring. I have received calls from people that are so drunk they are not making any sense whatsoever so I ask them to text me their address, well even their phone have been out drinking as well.

The best of all the emergency call outs ever must be the time I had a gentleman on the phone panicking and speaking really fast, I got his details but when I reached the address I was amazed to find him standing outside his door totally naked with a pizza box covering his personal parts. I asked him how did this happen and he replied it was his stag party the night before and his so called friends left him there with his mobile phone to fend for himself. It was hilarious as the first thing I ask for is identification which he had nothing. I then called on the neighbours house to see if they could identify him. They said no problem but when they saw him they just couldn't stop laughing and before you know it a few more came out to see what was going on. So there you go, some strange/funny emergency call outs for you. As I think of others I will add them.